Ok, we all know that I mean sunscreen but does ANY TODDLER like having sunscreen applied? Maybe it just needs a new name? Funscreen. Like when I call bathtime, splashtime. No?

MAYDAY MAYDAY: Does anyone have any ideas on how to apply sunscreen to a wiggly ToddlerMonster in a fun, laughter-filled manner? Or at least in a way that gets full coverage with zero tears?

I ordered the Target Baby Box last April ($5) with some great intentions of reviewing products for all of you wonderful people that take the time to read my little blog. I wanted to give something back to you, even if that something is just more of my opinions. I did not do that. Mostly because I’m lazy. But I did discover a wonderful baby sunscreen through that Baby Box so it was totally worth it. 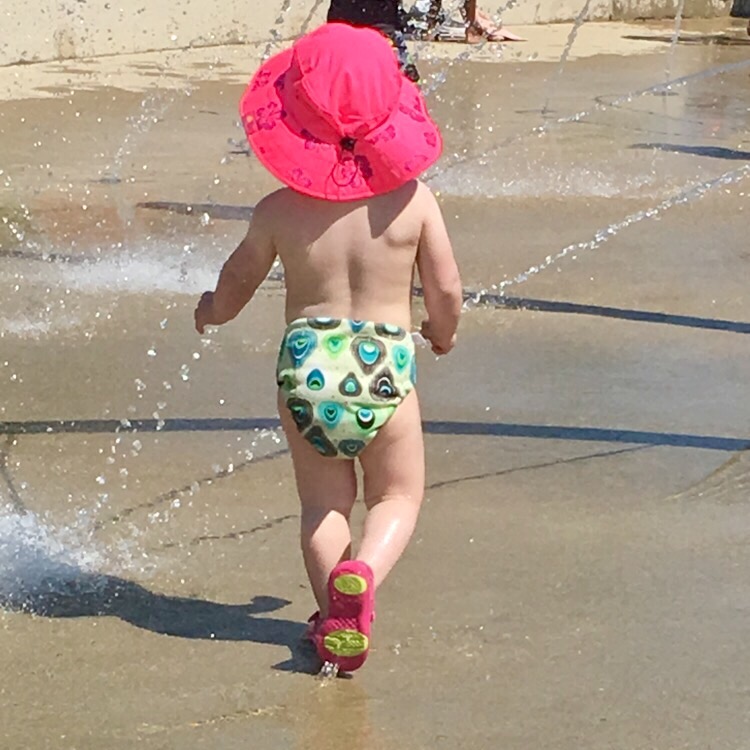 I highly recommend the Aveeno Baby Continuous Protection Sensitive Skin Lotion Zinc Oxide Sunscreen SPF 50. I have read a lot of scary articles this past spring about all of the poisonous crap in a lot of sunscreens out there in the world. I even found out that my SPF 15 face lotion was most likely going to kill me.

MAYDAY MAYDAY: Does anyone have and love a grownup face moisturizer with an SPF of at least 15?

I used the entire tiny bottle of Aveeno Sunscreen that came in the Target Baby Box and just recently had to replenish ($10.49). It goes on not-too-thick and it’s not at all greasy, but it definitely works. We have been in the sun quite a bit this summer and my little pale blond super white ghost baby has not had a single sunburn. Babystar is the whitest little marshmallow ever, so this stuff is legit! 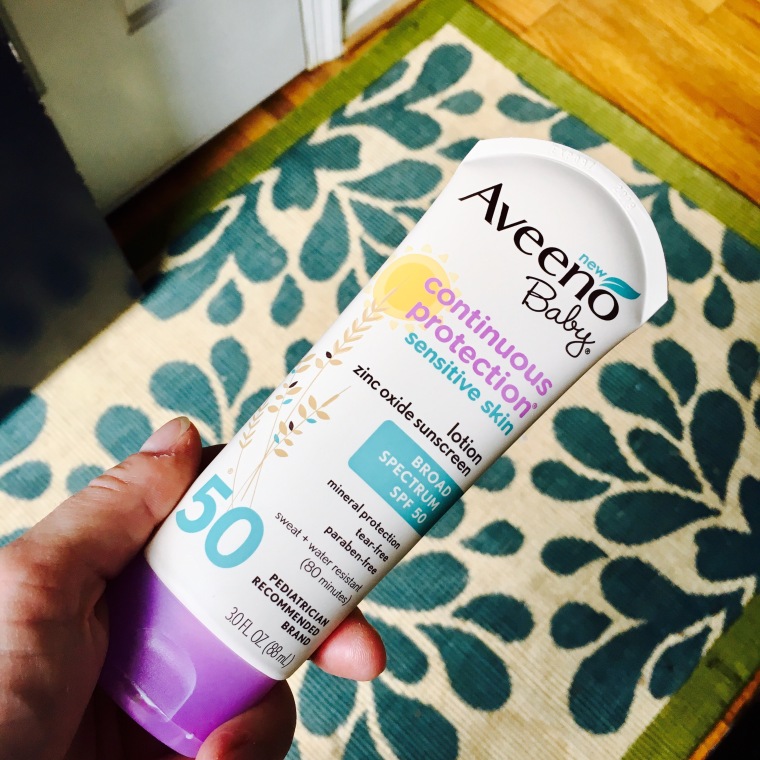 We just got back from a looooong but fuuuuun vacation in California.

And boy are my arms tired. Or something like that.

And then right away school started for the Teenager and I’m just finding a moment with my laptop friend today. Hey, boo. 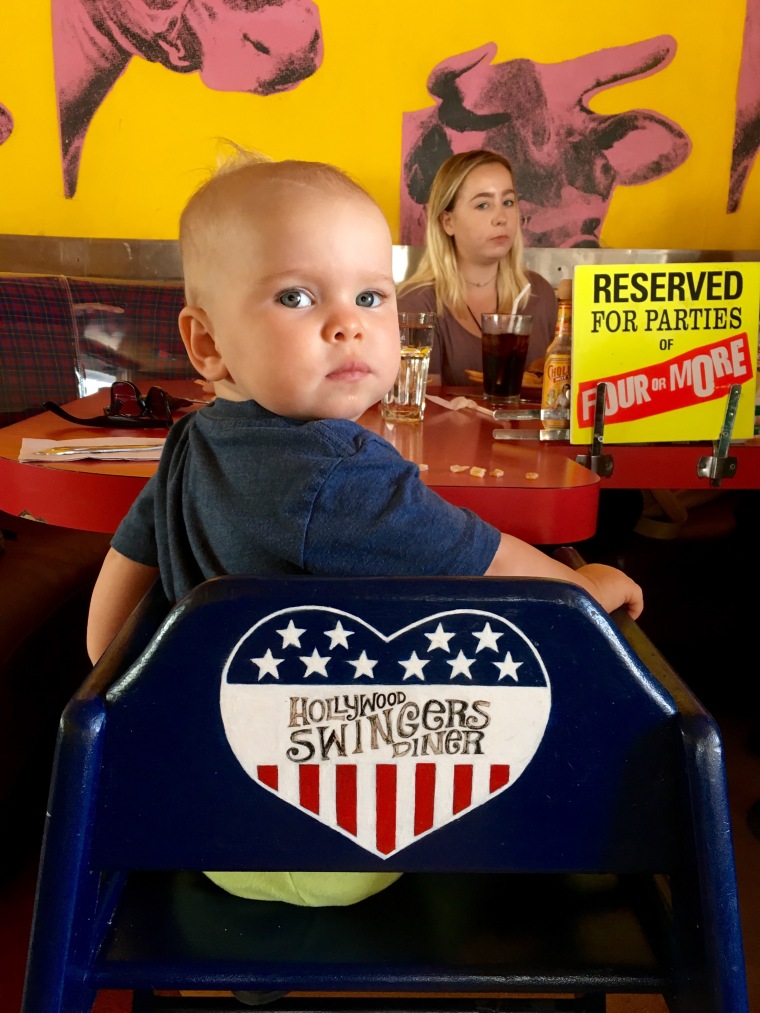 Babystar sleeps with me and still mostly shares our food out at restaurants so she really didn’t cost that much. She’s under two and we flew domestically so she was even free to fly. On the way home we did have an extra seat that was randomly empty in one of our rows thank goodness but we didn’t pay for it. 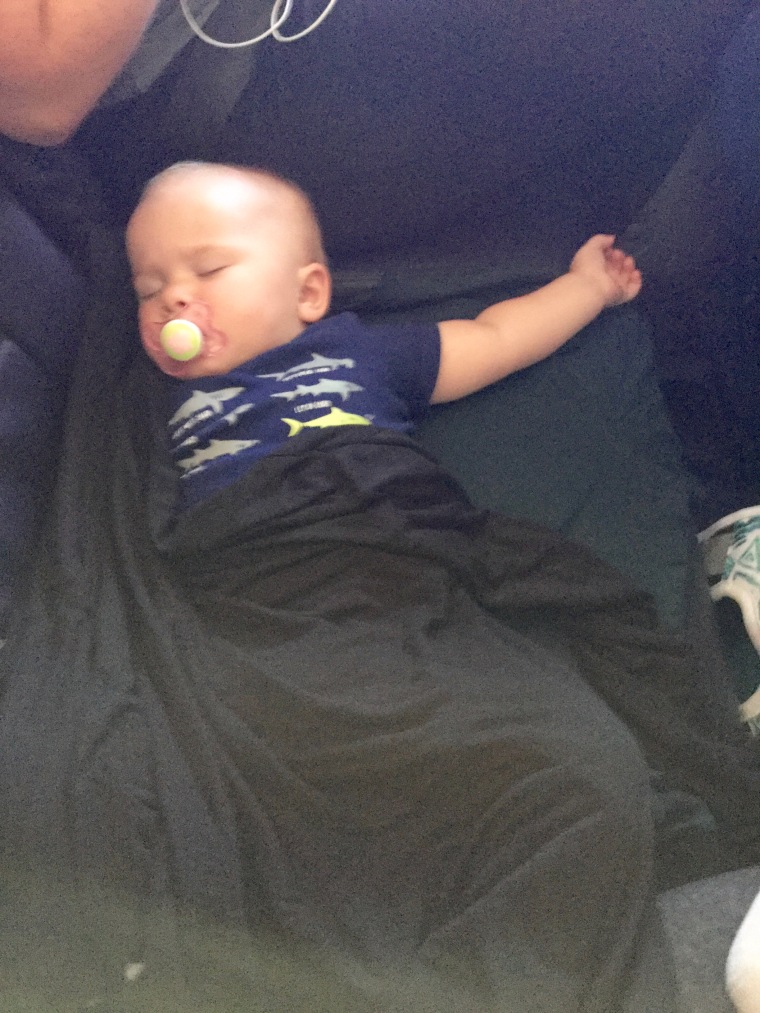 We did feed her though. Over half of the trip was spent in a super cool apartment in West Hollywood via AirBnB. It was very close to a Whole Foods. Guess what I learned? I really like Whole Foods brand diapers. (I did not bring cloth diapers because the other parts of the trip were in two different hotels and just no.) We also shopped at Trader Joe’s, Target and some oddly named store in downtown LA called Smart and Final. (WTH kind of name is that?) And H&M and we ordered actual food for her in restaurants a COUPLE of times.

Total for groceries purchased specifically for Babystar (even though we shared a little bit and she shared some of ours): $124.69

Meals out purchased just for Babystar:

Also we bought her a Venice Beach tee BUT NOT REALLY because it was Buy 2, Get 1 Free so we bought them for all of us girls. Hers was cheapest, therefore free. We did buy a few things at H&M though: a dress for $3 and a tank top for $3.

Who says babies are expensive? Oh, right. Me.

*I already have backseat mirrors for both cars here at home, but I couldn’t stand not seeing her in her car seat. So I bought one, and it’s currently attached to the crib where she enjoys peeping herself while playing in the crib. Which she totally does for like five minutes each day (while I spray her diapers).

Last week Babystar and I went to western Pennsylvania to visit family. I drove the minivan with my brother and his adorable fam along for the ride. They were super good at entertaining the baby while I drove. Thank goodness, because that baby takes after mama and HATES a long car ride. But we love our family. So there we were.

We had a blast. There isn’t much in western Pennsylvania between Pittsburgh and Erie besides farms and lakes, and we played at both. Babystar loved running around near the corn fields. And soybean fields. And llama fields. She did NOT like anyone touching her except me or anyone under the age of four. We ate together, slept together, swam together, and played together.

Skipping showers is all fun and games until you cuddle with a goat.

I would have made the trip even if Babystar did not exist in this world, so the gas and tolls are on me. I do have $36.65 worth of food and merchandise to add to her bottom line, though.

This is Kaia. I love this woman. Today is Kaia’s birthday, which she is celebrating from an undisclosed location. Just how she likes it. Once, a million years ago (yes that’s right we are immortal witches), she had a birthday party for herself but people (that she invited) came to her house and she couldn’t deal so her and I snuck out. Of her own birthday party. ❤️❤️❤️❤️❤️
2020 lewks. Pandemic so wide I gotta wear shades.
Remember aquariums? Museums? Parks? Plays? Concerts? People? I know they aren’t essential but I miss them. I really miss those jellyfish. ❤️🐙 #tbt Today is Thursday, right? I keep losing count. Jellyfish at @aquariumdenver
Our protagonist was slightly surprised to find herself alone with the ghosts in the slowly emptying Mansion House. What is required in a situation like this? Sage? Rosé? Clothes?
Peek a boo. 😻
Y’all want to know the secret to getting a Covid-19 antibody test in America? Have surgery! I’m fine btw. Totally almost died or whatever from my heart not working properly coming out from anesthesia. But like. I already know my heart doesn’t fucking work. 🙄