Babystar is incredibly discriminate about her toothbrushes and her toothpaste.

I owe a huge ‘thank you’ to Hello Products for including their toddler toothpaste in the gift bags at the Type-A Parent blogging conference last October.

We tried both the Apple and Watermelon flavor, and Babystar LOVES them. And now I can buy hippie toothpaste just like I always wanted.

Before I tried the Hello toothpaste (that I honestly thought Babystar would reject based on our experience with the strawberry Tom’s of Maine children’s toothpaste), I bought a tube of Orajel My Little Pony toothpaste ($3.24). And I have purchased more of the only toothbrush she will accept, the Woobamboo brand ($6.88 with Amazon Prime).

The Hello tubes were free, and I have plenty left. But I’m excited to have a new brand that she loves that isn’t full of artificial colors and plastered with cartoon characters. Very. Excited.

I am easily excited.

Santa’s not the only one with a list that goes on forever.

Sometimes I wonder why I am keeping track of every penny we spend raising Babystar.

That number at the bottom is mildly soul-crushing.

But keeping all of these notes is tedious and sometimes a bit boring. Not everything deserves it’s own post.

I bought a new outfit for Kelsey, which is Babystar’s favorite baby doll (these days). Kelsey is the cheap Honestly Cute brand baby doll from Target. (Babystar ignores her pricey American Girl Bitty Baby. It’s kind of hilarious.) I have no idea where Babystar heard the name Kelsey, but she named her all by herself. We don’t even know anyone named Kelsey. The $9.99 outfit was definitely a bribe, but I don’t remember for what exactly. Life, probably.

I bought a hat and mittens set for $7.99 because I couldn’t find any of Babystar’s hats. I later found three hundred hats in the closet.

I bought four sets of mittens for fifty cents each, hoping to have at least two mittens in the house at all times. I am not hopeful.

I have bought four really cool packets of on-the-go fun. They are little coloring books with a few crayons and stickers. You can find them for $1 each at Target or Micheal’s. We have already used the Rudolph one and the My Little Pony. I still have dinosaurs and Trolls in case of emergency. I really need to create my own busy bags. Maybe that will by my New Year’s Resolution. It’s nice and attainable.

Oh, and I spent $3.60 more on sticker packs. Usually as baby-be-good-bribes.

I broke my car-screen cherry with this kid and paid $3.99 to rent Trolls Holiday on my iPad last week for Babystar to watch in the car while we ran four hundred errands. Bonus: I now know all the words to Trolls Holiday.

Just kidding. I already knew all the words.

We paid $17.99 to buy Blue’s Clues Season 3 because we were tired of streaming the free Season 1. And Season 3 has the holiday episode. And  we both love Blue’s Clues.

We had a HUUUUUGE blowout while spontaneously out with friends a while back but luckily we were literally next door to a kid’s consignment shop. Like, the only one in my area. I bought her an adorable Marimekko outfit for $16.95 that is still too big but we rolled the pants up. I also paid $17.50 for used shiny gold shoes because I was a little stressed out and she wanted them even though she didn’t actually poop on her shoes. Thank goddess.

And we have two Advent Calendars for her this year. She loves her $2.59 ‘Snowman Chocolate’ (there is a picture of a snowman on the front) and remembers it every day and she is getting REALLY GOOD at finding and recognizing the numbers so I think we need these babies year round. I also got her a puzzle advent calendar ($4.95) that is less popular but she still likes it. After she gets her ‘snowman chocolate’ and cons at least one of her older siblings out of their ‘snowman chocolate’. Suckers.

We have a really cute snow globe ornament that has never made it on to the tree because  Babystar NEEDED it in Nordstrom Rack and then totally forgot about it. I just found it in the bottom of a bag the other day. Oh well. It’s pretty. And $3.97 is a fair deal for twenty minutes of Toddler Patience.

We also have a vintage Apple Dumplin’ doll. You know, Strawberry Shortcake’s little sister. She already has been separated from her socks and her turtle but they are around somewhere. Vintage toys on eBay combined wth one-touch PayPal and insomnia get me EVERY TIME. This one was $16.95. Plus I totally have Strawberry Shortcake and some of her friends wrapped under the Christmas tree, but Target wasn’t selling the retro Apple Dumplin’ doll. And Babystar loves Apple Dumplin’ thanks to her big sister showing her a few youtube videos.

But Babystar calls her Apple Donut. Because what the hell is a dumpling? I love it. 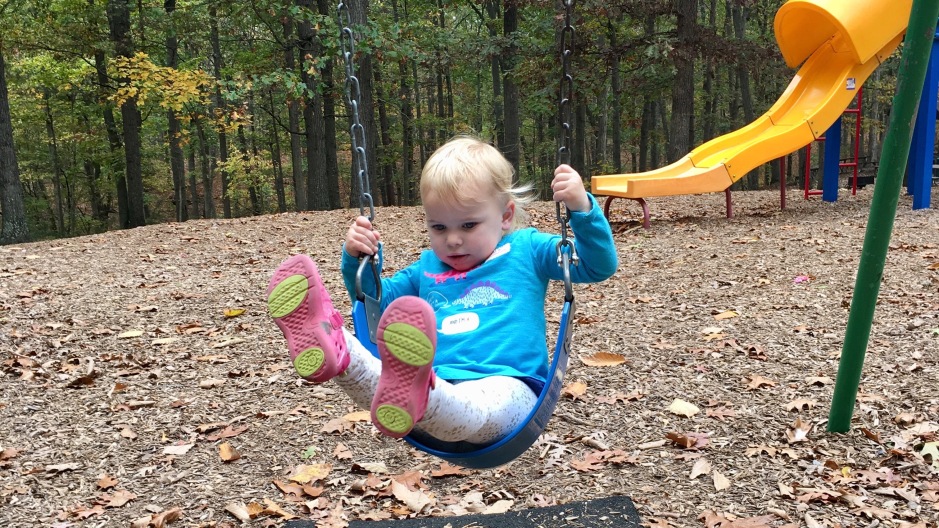 September was the kind of hot that made me doubt Fall even existed. October gave us a few less-than-scalding days, but it was still too warm for a jacket. Or socks. FINALLY, now that is is freaking November, cooler weather has descended upon the us here in the DC area. Praise be. Hallelujah. Amen. Blessings to the Horae. All of it.

Babystar is super lucky; she has a Grammy that loves to shop. And by that I mean that WE are all very lucky that Grammy loves to shop, because we get surprise boxes of clothes throughout the year. Last month we received a box full of 3T leggings and a few other random outfits.

Fun fact: Grammy (aka my MIL) has started removing all of the tags before mailing so that I cannot exchange anything. And almost everything she sends is pink. Or flowery. Or pink and flowery. Grammy is also on board with the star theme so we get a lot of star prints too. I love it. I really do love it. But the tag thing is hilarious.

So obviously, Babystar is SET on leggings this fall. In fact, the leggings drawer literally overfloweth. AND YET I BOUGHT TWO MORE PAIRS OF LEGGINGS ANYWAY. Partially to balance the pink and partially because Target was having a sale on Cat and Jack but mostly because LOOK HOW SWEET. ($3.75 each! Cat and Jack was 25% off of already stupidly low prices. COME. ON.) 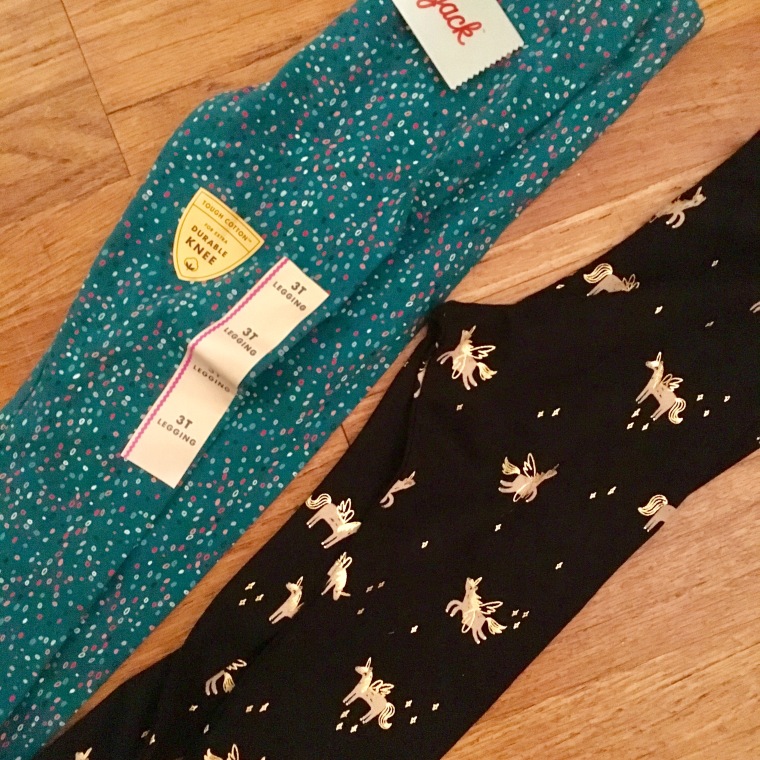 We also bought a few long sleeve shirts and sweatshirts that should last the season. (Maybe. I do love a good sale. And I kind of hate laundry.) 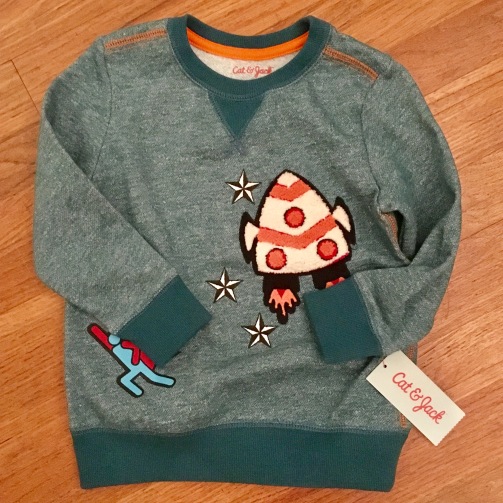 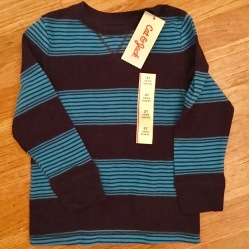 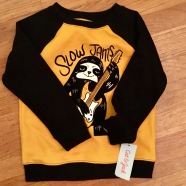 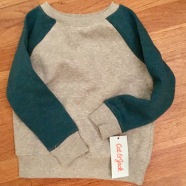 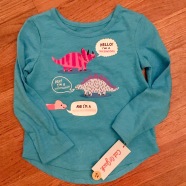 I will probably buy her a coat or something this winter. (Probably this one.) If my lovely MIL doesn’t send a box of various coats in various lengths and various weights and various fabrics first. (I love it. I hope that is coming through. I really do love her thoughtfulness, and she waited a long freaking time for a grandchild.)

Unrelated (always related): I have been encouraging the toddler to choose her own clothes. That is my version. Her version might be different and include the phrase “I do what I want.” But the end result is that I have learned a fashion secret. Nobody but NOBODY can mix patterns like a Toddler. 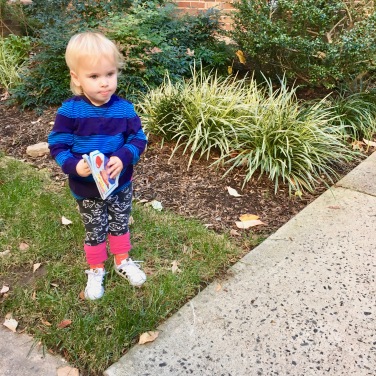 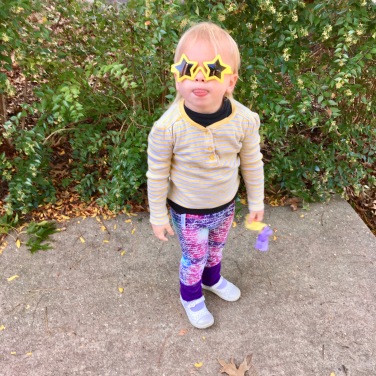 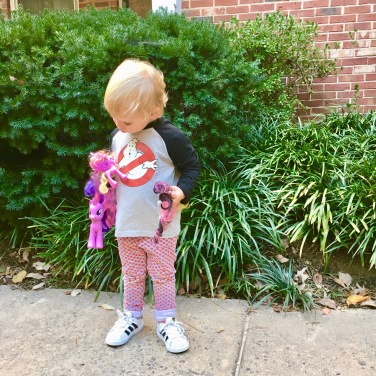 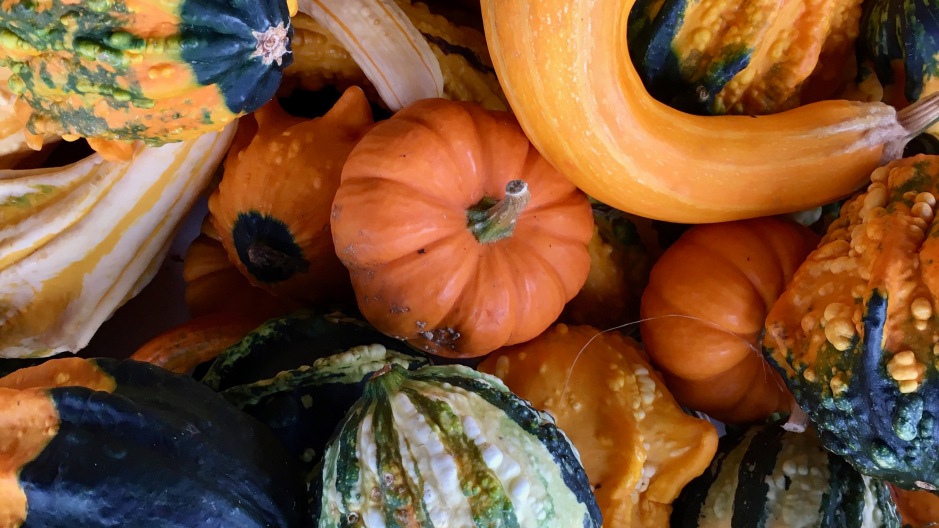 Babystar says everything is ‘too scary.’ 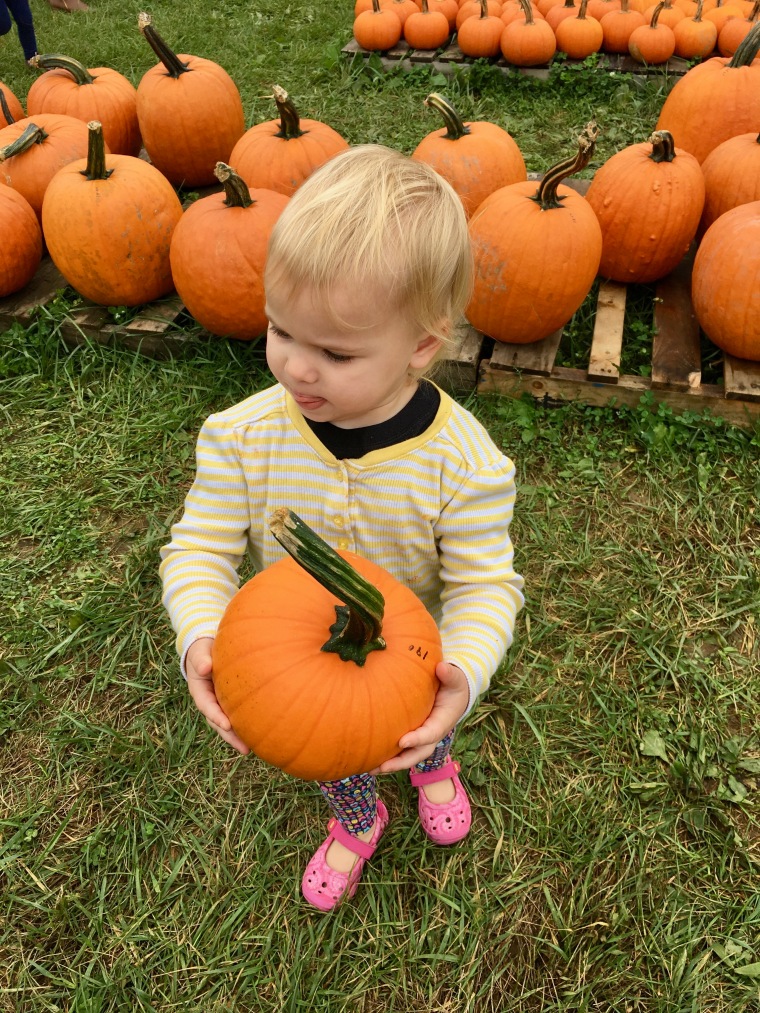 We piled the pumpkins all over the house.

We had a pumpking painting party for Babystar’s friends. And my friends. Let’s be real; she’s two years old. I pick her friends. ($13 for stickers, $3.99 for muffins. I already had lots of paint. And lots of apples.)

In definite non-scary but totally adorable form, we are dressing as llamas this Halloween. Everyone thinks we are sheep, probably because the costume cannot actually extend our necks. So we spit on everyone instead. Just kidding. Maybe. ($25 for the Toddler Llama and $20 each for the Teenager Llama and Mama Llama. $1 for the plastic pumpkin.) 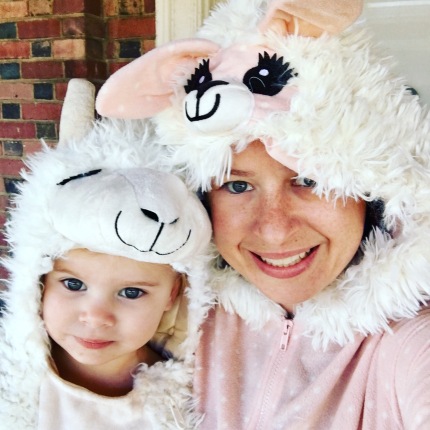 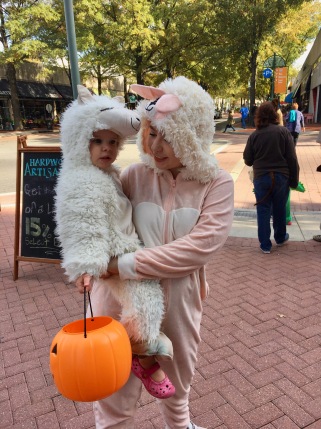 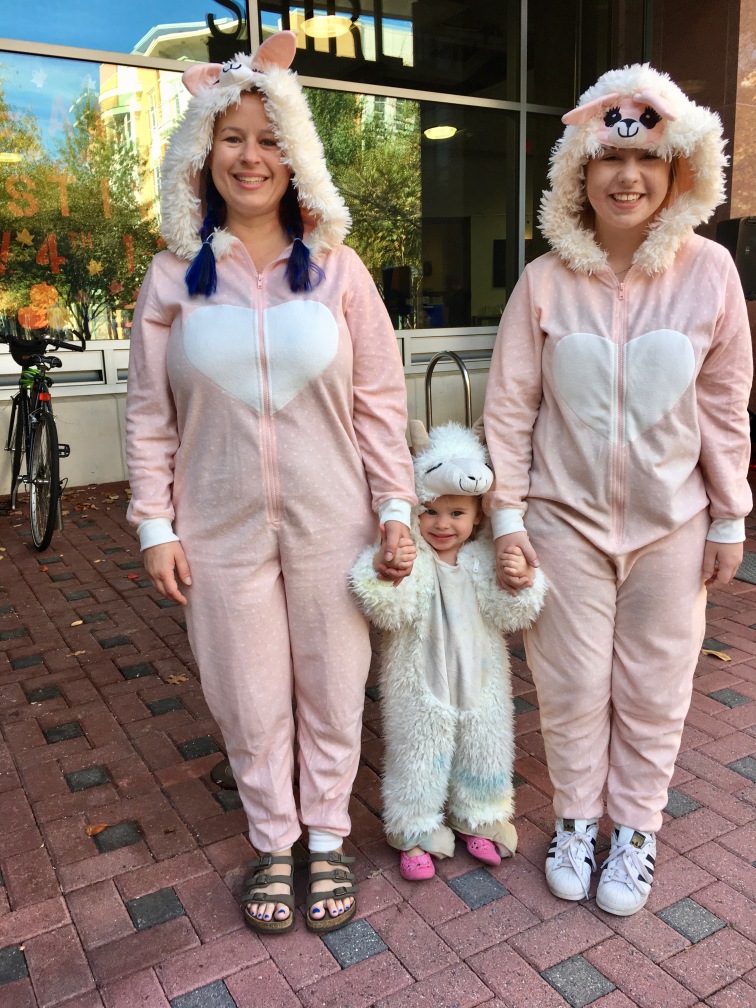 This picture is actually from Saturday, and it was rather warm that afternoon. I’ve got my llama toes out. We’ll wear the same costumes for Trick-or-Treating tonight, and I hope it’s a lot cooler. Literally cooler, like temperature-wise. I’m sure it will be fine either way though, because Babystar is 100% ON BOARD with this whole Begging-for-Candy situation.

This Monday, the Mama is me.

I am too tired to google it. 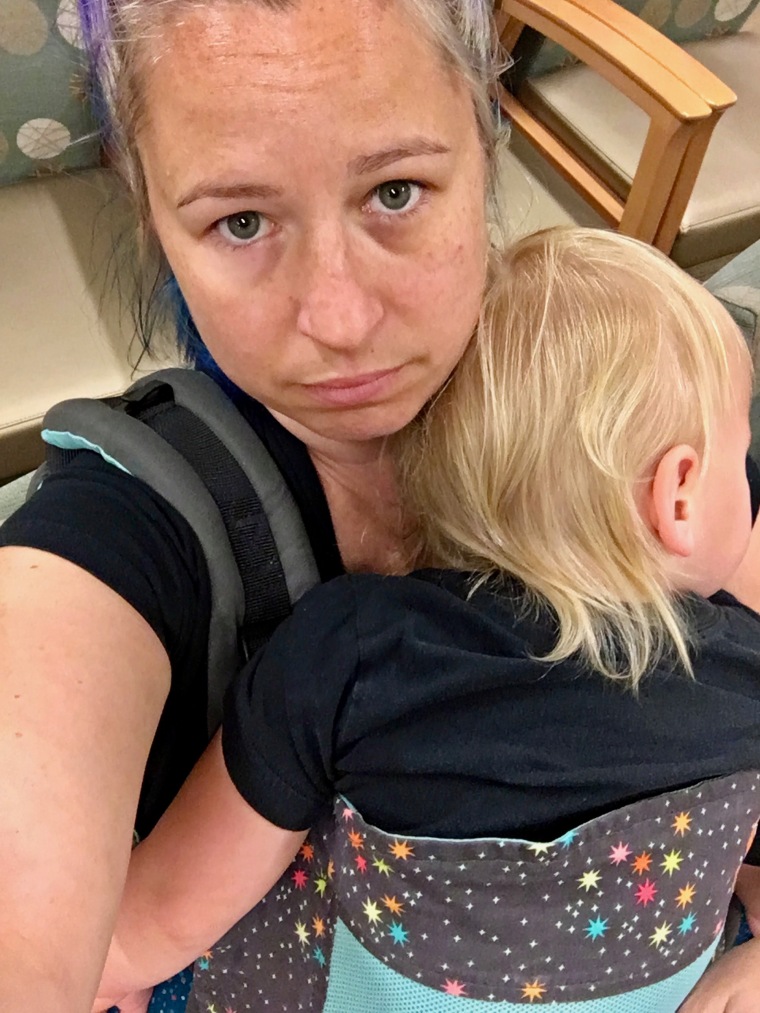 We will return next Monday with our regularly scheduled MORE-AWESOME-THAN-ME Mamas. Hopefully.