I used to love Thanksgiving, back in the last millennium when I was but a wee little one. Thanksgiving meant a break from school, lots of cousins, and extra desserts. It was the beginning of the holiday season. My dad had a big family all close together, so I remember folding tables for MILES that stretched through doorways into adjoining rooms. We kids were running and tumbling everywhere, or more often banished upstairs or outside (depending on the weather), where we got into all kinds of mischief. Ouija boards and naked Barbie dolls feature prominently in my childhood memories.

But now. Everyone has moved away or passed away or simply doesn’t hang out together anymore. My husband is an only child. I live pretty far from most of my family. Air travel is so damn expensive this week. We used to have a LOVELY lonely Hard Candy Christmas type of Thanksgiving with just us and the cats, with the two older children at their dad’s house and the Babystar not yet existing. WHY does having a baby come with certain holiday expectations? My in-laws moved to Myrtle Beach about five minutes before I got pregnant with Babystar (or I doubt they would have made the move). And so we tortured the teenager and the toddler on Interstate 95 last week.

I despise I-95. Fuck that road. The actual visit was lovely, though.

We did break up the trip on the way down because the baby cannot stand more than five hours in the car. Total, all day. After that begins the screamy times. Also, it cannot be dark. Also, someone must hold her hand at all times. Also, people must be singing. People she actually KNOWS, not people from the radio. Dance music isn’t fun unless we can actually dance. DUH, MOM.

So anyway, that $136.53 at the Hampton Inn is on Babystar’s tab. We could have driven straight through without her along.

Once we arrived, Myrtle Beach was a whirlwind of food and shopping. I wasn’t mad at all. My MIL is a very good cook, even though she always pretends not to be very hungry while she passing me the gravy. Or the butter. Or the cupcakes and ice cream with peanut butter cups on top. Of both.

And that woman is FIRE at the mall. Do you remember that episode of Gilmore Girls where Lorelei and Rory run into Emily at the mall and everyone there knows her? And they know all about Lorelei and Rory too, just by association? It was like that, if Emily Gilmore was much nicer. The teenager and I just watched in awe. I am not even kidding. The dude at the Cinnabon kiosk had her coffee ready when she walked by. One lady at a department store recognized her immediately and told her all about the sales on the ceramic pumpkins that she has had her eye on for two months. A lady in the shoe department knew that the Teenager was a gymnast without being told, and had been thinking about the perfect boots for her since before the Teenager even knew that she was getting boots. A different lady at a different department store gave me hella free samples including actual travel sizes with my Kiehl’s purchase because I was with  my MIL. I straight up asked her (out of MIL’s hearing) if she was being so nice because I was with MIL, and she looked me straight in the eyes, smiled, and gave a single nod. I buy Kiehl’s at home all the time and they maybe give me two samples of lotion. If I ask nicely.

We did pop out to the outlets once on our own and while the Teenager and I were standing in line, my sweet husband distracted the baby by going to look at the ‘dogs’ at the weird outlet mall kiosk. $13 later, we owned one of those yippy beasts.

We also took a walk one day and found ourselves at a playground and then at Barnes & Noble where we spent way too much time (and money) in the children’s section. We brought home three board books and one story book for $45.32. Yes, they probably would have been less on Amazon, but it feels good to support a brick & mortar book store. I never would have said that about a chain bookstore even ten years ago, but now even the chains are dying. RIP Borders. 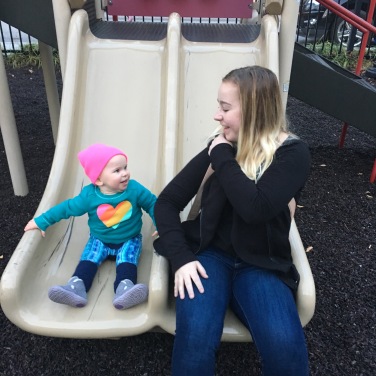 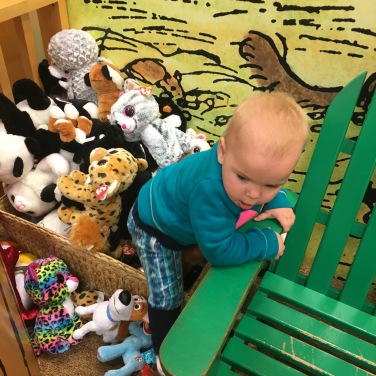 Another day, we went down to the boardwalk for a bit. The sand was cold but the ocean was beautiful. We watched the sun set and then Babystar got excited about all the lights. She had fun running around the arcades pushing blinking buttons and getting some wiggles out. And I bought her a $5 piece of crap light up thingy that she IMMEDIATELY bashed against the boardwalk until it broke. It still lit up for another two hours or so. It is in the trash now.

The WORST part of the trip was that it would have been considered rude to binge watch the new Gilmore Girls and the Teenager is so busy during the school week and we will have to wait over a week to see what is up with Rory and Lorelei. We have cleared Sunday evening’s schedule and now I just have to avoid spoilers. I’m scared, y’all. I might google in a moment of weakness. Like a 4am insomnia moment of weakness. Please keep me in your prayers.

The ride home was straight through, though broken up by fast food play places and one actual restaurant. We had snacks from South Carolina and the food on our plates and the ever present mama milk so the only cost to feed her was the $3 cookie I bought her at the fancy grown-up restaurant to eat while we ate our actual dinner. Judge me, I don’t care. I was hungry and desperate. I do not recommend this at all but it TOTALLY works in an actual meltdown-avoidance-emergency.

4 thoughts on “To Grandma’s House We Went.”